Close-Up Culture reveal our 100 favourite movie deaths – whether they are heart-wrenching, gruesome, shocking, or amusing.

With the authorities hot on their trail, Thelma and Louise agree to go out together in spectacular fashion. 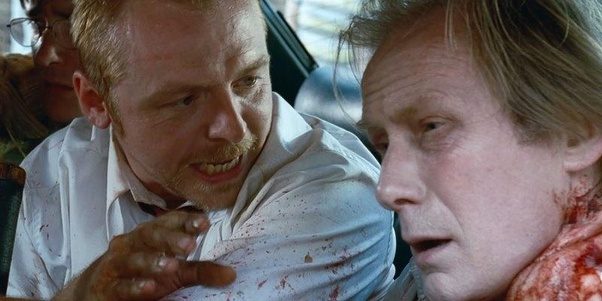 Philip gives some tender words to step son Shaun before he transforms into a zombie and tries to eat everyone.

There are tears all round – myself included – as Old Yeller is put down by Travis.

Katniss comforts Rue as she falls victim to the brutal Hunger Games.

Sarah and co say a tearful goodbye to Andrew at the hospital. 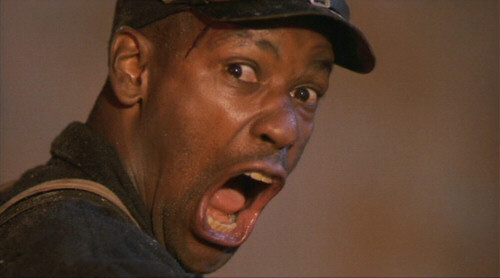 Colonel Shaw and Private Trip are shot down in the attack on Fort Wagner.

Sam is shot dead by a mugger and watches the aftermath of his death as a ghost.

After a struggle with the Ghostface Killer, Tatum gets crushed in a doggie door.

Young Thomas is attacked by bees in the woods, leading to many tear-jerking scenes.

Dani and co watch on in horror as two elders jump from a cliff to a gruesome death. Unfortunately for one elder the fall isn’t enough to do this job.

Ava and Kyoko get bloody revenge on their creator.

Whassup? Bob apparently. His trip to the kitchen for beers is interrupted by Michael Myers, who pins him to the wall with a knife. 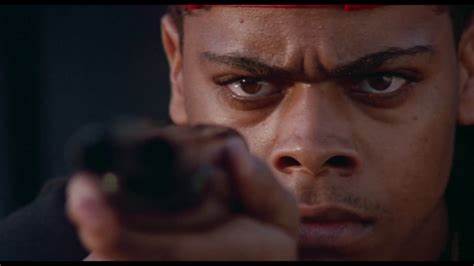 Ricky is gunned down in an alleyway by one of Ferris’ men.

Of all of Freddy’s creative kills, turning Phillip into a flesh puppet has to rank as the freakiest.

Bing Bong sacrifices himself so Joy can escape the Memory Dump. A true legend.

This agonisingly slow film ends in shocking fashion, with male nurse David being hit by a car.

Dr. Cooper tries to revive Norris with a defibrillator but things don’t go to plan.

Hazel reflect on her past pain after learning of Gus’ death.

Father Karras commands the demon to enter his body before throwing himself out of the window.

Idgie is comforted by Sipsey as she mourns for Ruth. 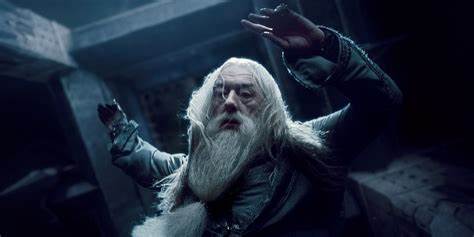 Snape keeps his promise and kills Dumbledore when Draco can’t. He has good dramatic fall to his death, but not the best on this list. 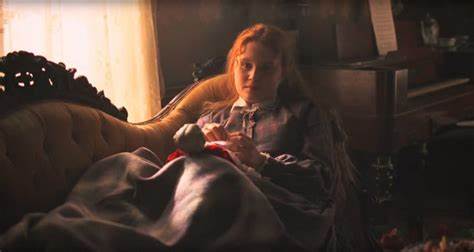 The March family enjoy one last Christmas together before Beth’s tragic death. Leon delivers a gift from Mathilda to Stansfield, in the form of an explosive vest. 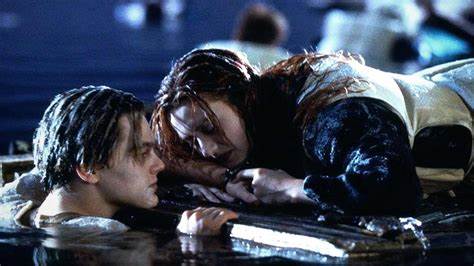 After the Titanic sinks, space hogger Rose *has* to let go of Jack in the icy waters of the Atlantic Ocean.

Hitler and a theatre full of Nazis are burned alive and shot dead.

Rick becomes another victim of Louis unrelenting pursuit of success, in the unsettling close to Nightcrawler.

Hogarth flies into the sky to intercept a missile and save thousands of lives.

Dr. King Schultz gives Calvin Candie a deadly handshake but then, almost immediately after, meets his own demise.

Nicky and his brother are beaten to death in a cornfield. Brutal.

The unforgettable montage in Up ends with Ellie’s tragic passing. Gets me every time.

Scottish warrior William Wallace has one last cry of defiance before he is decapitated.

Snape shares one final moment with Harry Potter after he is fatally wounded by Voldemort.

We say goodbye to Hugh Jackman’s Wolverine as he dies in front of young Laura.

Yoda reveals a shocking truth to Luke before he quietly passes away.

Donny suffers a heart attack during a car park brawl. Thankfully Walt and the Dude give him perfect send-off, or at least they try to. 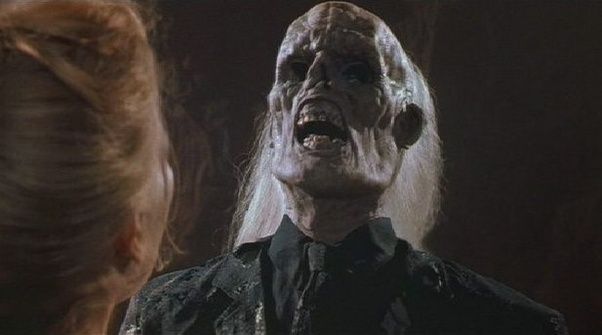 Walter drinks out of the wrong cup and meets a horrific end.

Blake dies in Schofield’s arms after a shocking incident with a pilot. 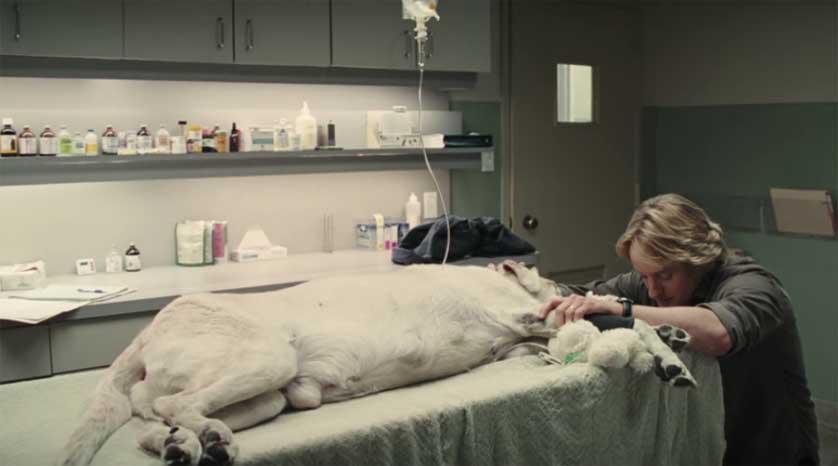 Mention Marley and Me to anyone and they’ll likely let out a sad sigh. Dog deaths hit hard, and it’s no different here as John is by Marley’s side for his emotional last moments. 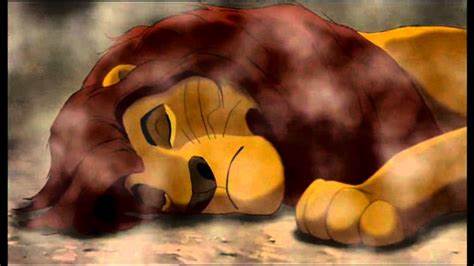 Scar takes advantage of a stampede to murder Mufasa and cement his place as one of Disney’s greatest villains. 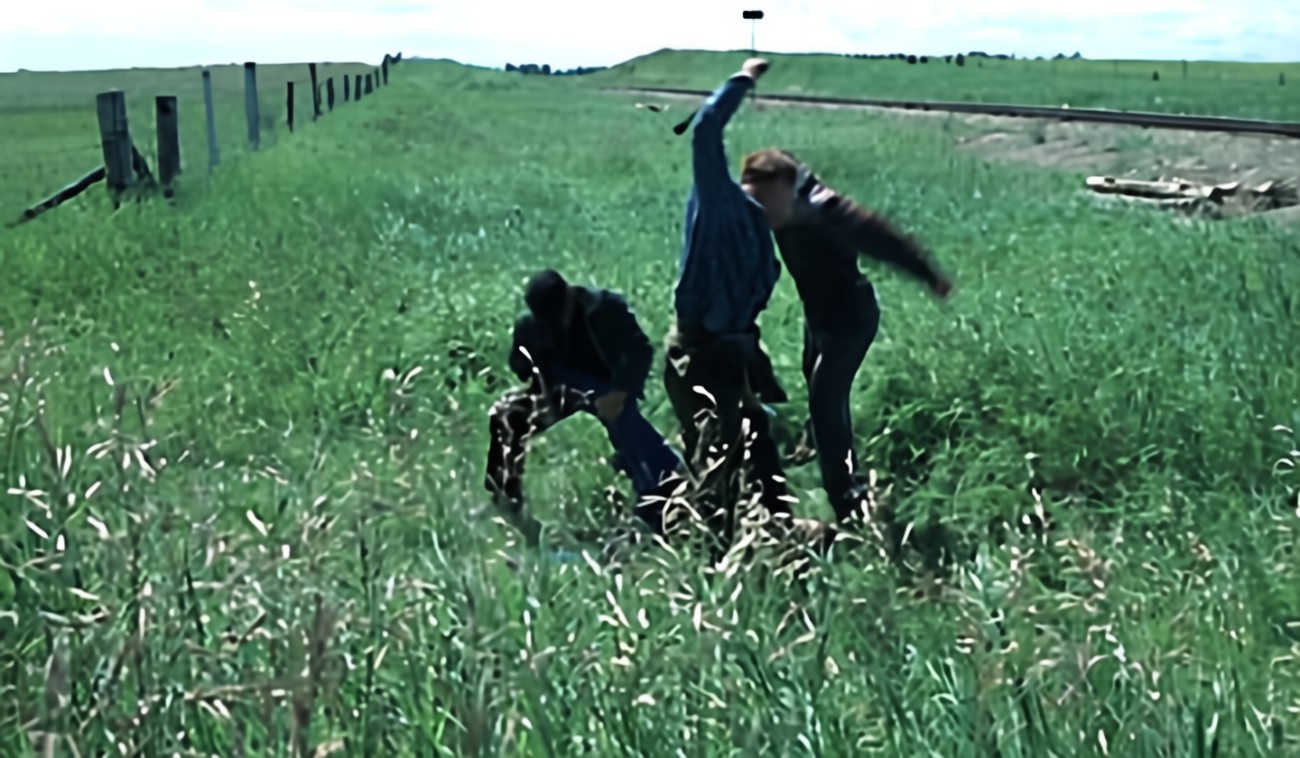 Ennis is told Jack died in an accident after a car tire exploded in his face, but he visualises a much more disturbing fate.

Sullivan returns from Costigan’s funeral to a nasty surprise from Dignam.

Tommy is tricked into believing he is to become a made man and is murdered.

Kirk and the crew can only watch on as Spock sacrifices himself to save the USS Enterprise.

Robert Muldoon appreciates the hunting nous of a raptor before it kills him.

Beatrix finally gets her revenge on Bill with the Five Point Palm Exploding Heart Technique.

Lee has an emotional message before he sacrifices himself to save his children. 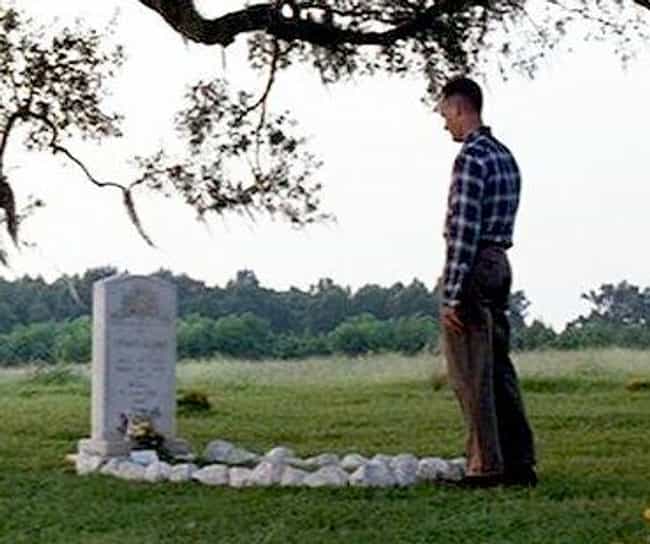 Forrest has to say goodbye to his childhood sweetheart Jenny.

Frankie tells bed-ridden Maggie the meaning of ‘mo cuishle’ before helping to end her life.

Mills is horrified to discover what’s in John Doe’s box.

After being killed by Commodus, Maximus is carried out of the arena by his allies.

Boromir dies in the arms of Aragorn following a brave battle with uruk-hai.

Hallorann returns to the Overlook Hotel, only to be greeted by an insane Jack and the sharp end of his axe.

Billy dies after a brutal bout, leaving behind a devastated family.

Zoe and James find each other on the beach, just in time to watch the world end. An ending that would be copied for the climax of Star Wars’ Rogue One.

In this stress-inducing scene, Dennis is devoured by a Dilophosaurus in his jeep. 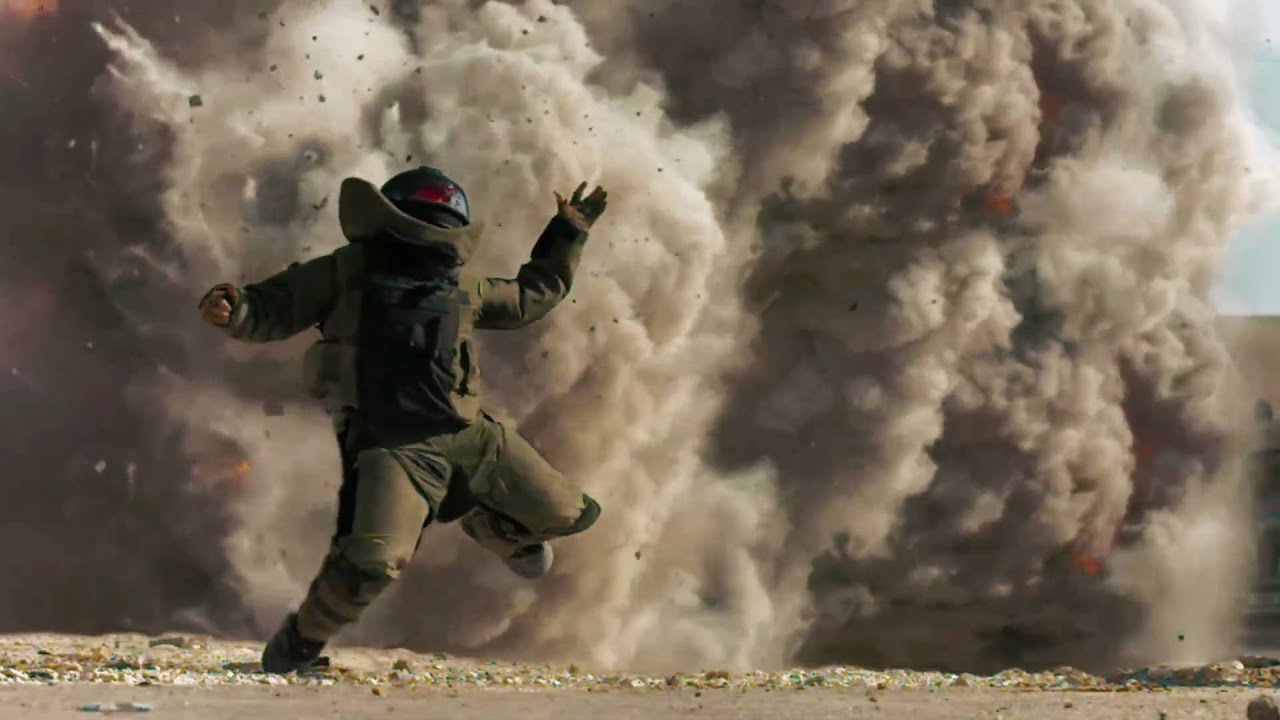 More unbearable tension as James is unable to take a bomb off a Iraqi civilian before it explodes.

Amy goes fifty shades of red with nasty surprise between the sheets for Desi.

Jess returns home after a day out to learn his friend Leslie has tragically died. I still haven’t forgiven this film for this heartbreaking twist.

Captain Miller uses his final words to give Private Ryan a reminder of the sacrifices that have been made for him. 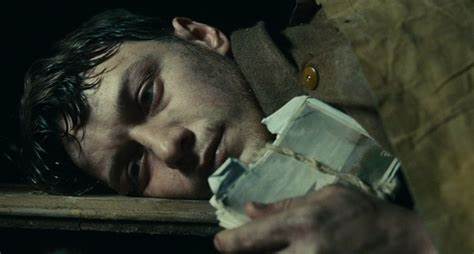 Briony reveals the true and tragic fate of  Cecilia and Robbie.

Harmonica gets his long waited vengeance by killing Frank and revealing his identity in unforgettable fashion. 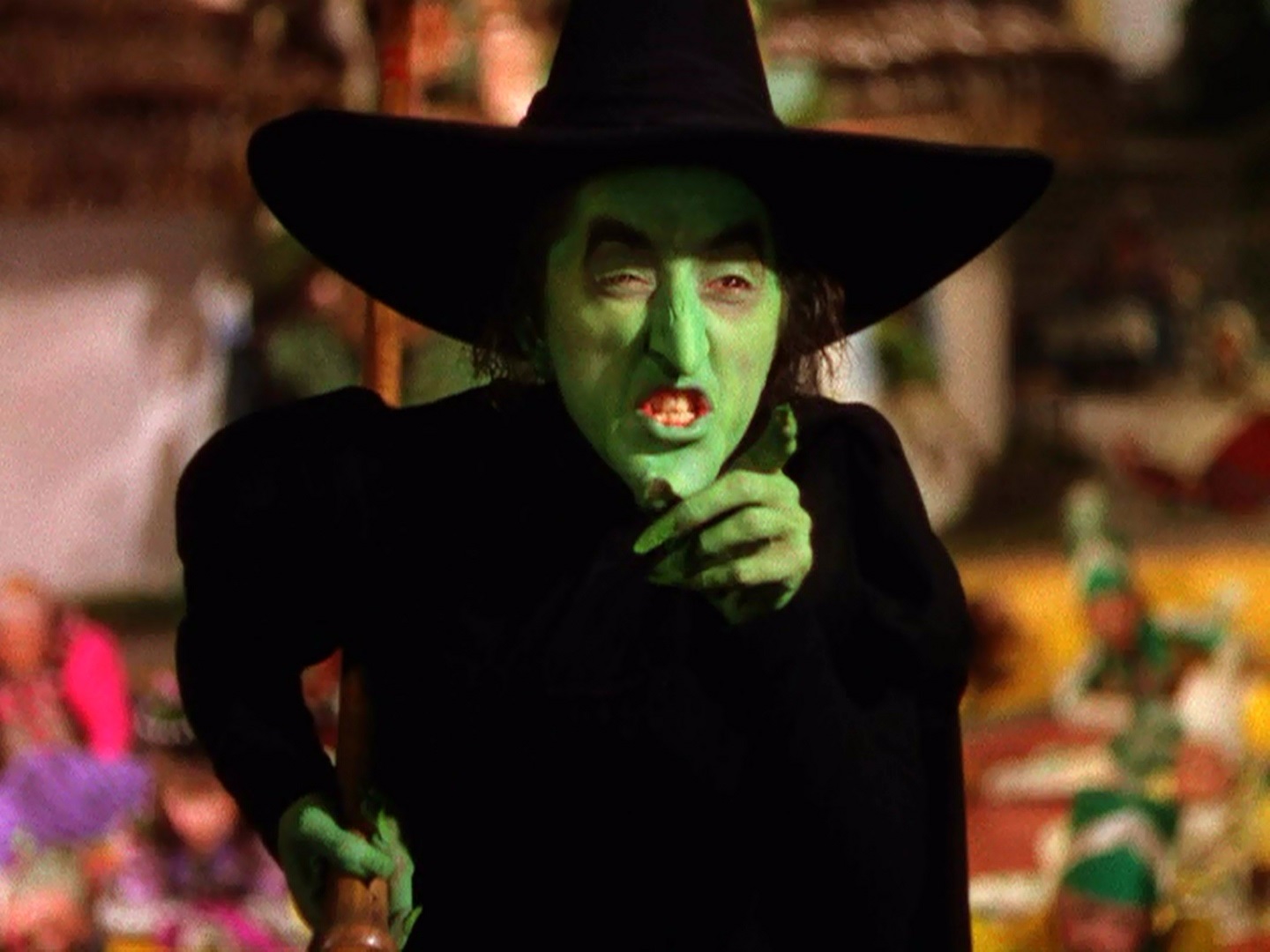 The Wicked Witch of the West melts after being splashed with water by Dorothy. 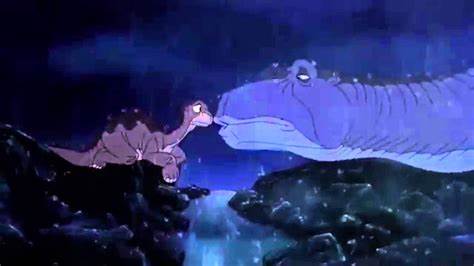 Littlefoot’s mother imparts some words of wisdom before she passes on.

Furiosa delivers a memorable line to Immortan Joe before killing the tyrant.

The little girl in red – the one glimmer of colour in this devastating film, is seen among the masses of dead. A fleeting yet unforgettably powerful moment.

Derek laments his terrible life decisions as his brother, who has been shot, dies in his arms. 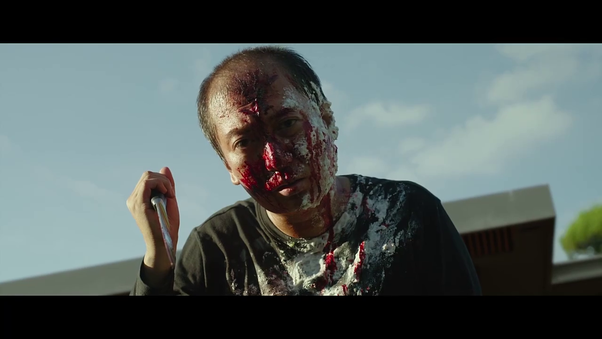 Chaos reigns at a birthday party as Ki Jung is stabbed by a mysterious man.

Obi -Wan Kenobi lets Darth Vader strike him down in from of Luke and Leia.

Lawyer Mr. Gennaro is eaten by a T-Rex while hiding in a toilet. 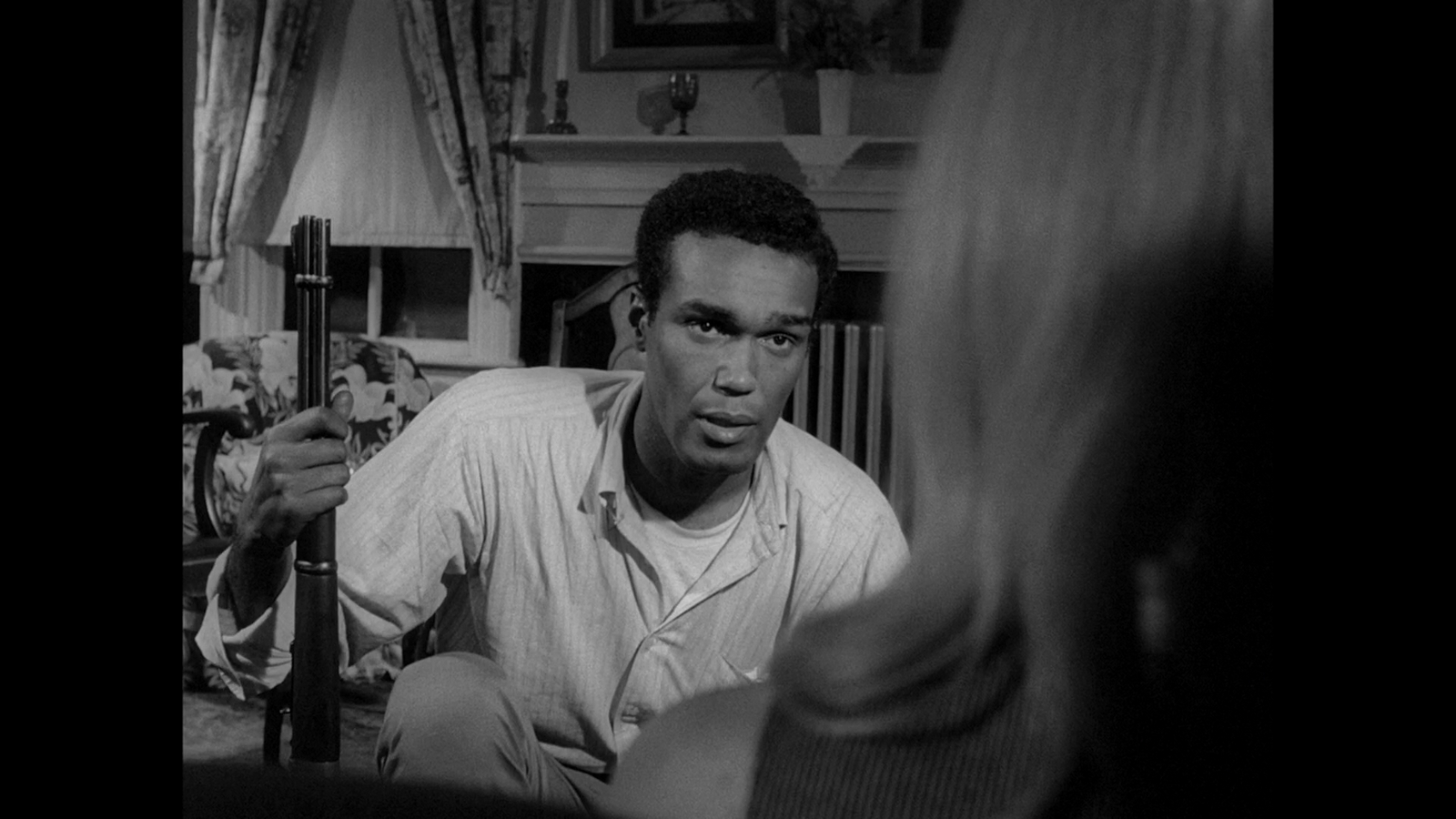 Ben survives a night of zombie chaos before mistakenly being shot right between the eyes by the living. 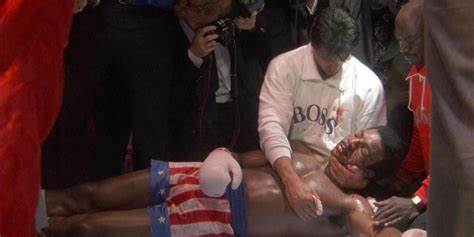 Rocky throws in the towel too late as Drago pummels Apollo to death.

Elias falls to his knees in dramatic fashion as gunned down by the Viet Cong.

Midsommar comes to a close with Christian, who is stuffed into a disemboweled bear’s body, being burned alive as part of a ritual sacrifice.

In the haunting opening to this film, Khalil is shot dead by a white police officer during a routine car stop.

Peter’s ill-fated drive ends with his sister, Charlie, losing her head – literally. A numbing moment that left me wanting to run out of the cinema and never think about Hereditary ever again.

After a torturous training camp, Pyle shoots Sgt. Hartman dead and then kills himself.

Sullivan evades capture in a shocking turn of events as Costigan is shot dead by Trooper Brown.

The Ark of The Covenant is opened and a bunch of Nazis die in spectacular fashion. A lot fascists dying in gruesome ways on this list – smashing stuff. 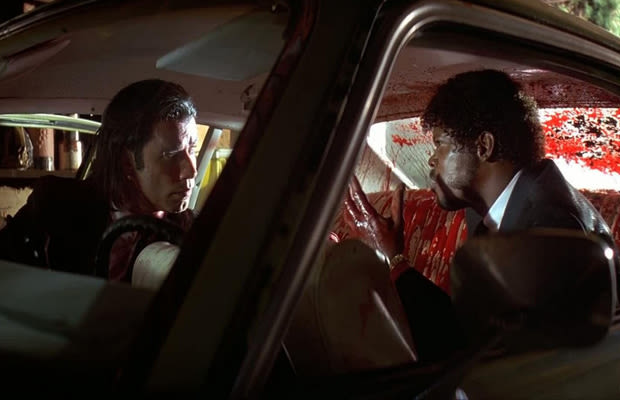 Vincent needs an expert clean-up job after he accidently shoots Marvin in the face.

Jack fails to make his way out of the maze and succumbs to the snowy weather.

Radio Raheem is killed by a police officer in this deeply disturbing scene.

The Godfather isn’t gunned down or blown up like most mobsters, he suffers a heart attack while playing with his grandson in the garden.

Tony goes out all guns blazing.

Michael and Nick play one final round of Russian roulette. 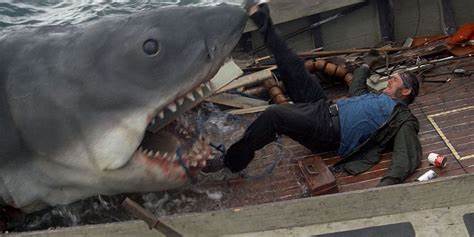 Quint meets a terrifying end in the jaws of cinema’s most feared shark.

John Coffey dies on the electric chair in this heart-breaking scene. 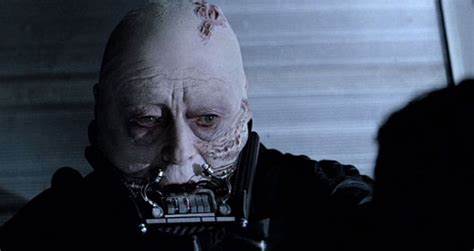 Luke Skywalker takes off Darth Vader’s mask and looks into the eyes of his father, Anakin Skywalker, as he passes away.

Roy delivers some iconic final words to Deckard before dying. 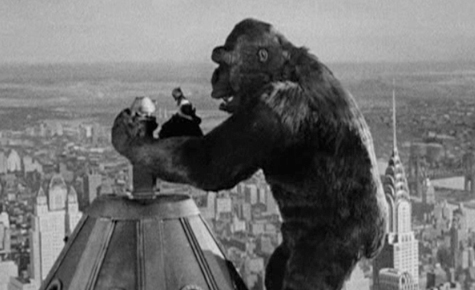 King Kong falls his death after an aerial attack. 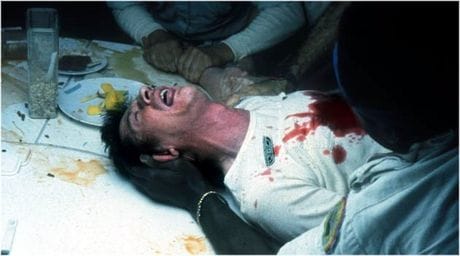 A jovial dinner between crewmates is interrupted by the horrific sight of a chest busting alien.

Citizen Kane begins with the death of Charles Foster Kane, a scene that cinephiles continue to study and admire for its symbolism.

One of cinema’s most heart-wrenching scenes sees young Bambi lose her mother.

Marion is stabbed in the shower in cinema’s most iconic murder scene.